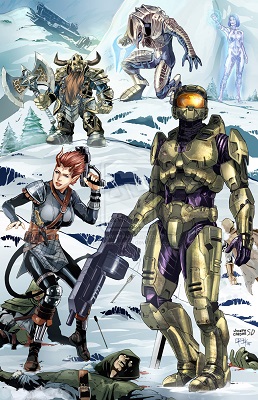 Halo: Finishing the Fight is a crossover styled story taking place in an alternate ending to Halo 3, where the remaining members of the Forward Unto Dawn's crew (The Master Chief, Cortana, Commander Keyes, Sergeant Major Johnson, and the Arbiter) escape the destruction of the Halo array with their lives, only to get sucked through a Negative Space Wedgie in the process, and wind up literally crash-landing into the Forgotten Realms universe (sometime between The Icewind Dale Trilogy and the Legacy of the Drow Series).

Before long, the crew meets the natives of Faerun, and find themselves drawn ever deeper into the conflicts of the local world. As tensions mount, and armies are mustered, the Dawn's crew is forced to pick a side and make their stand, while trying to make sense of who brought them to this strange world, and more importantly, why?

Halo: Finishing the Fight is, as the author put it, "the result of what started as a series of postulated "what ifs" among the author and his friends after a night spent consuming too much root beer while playing games, and listening to far too much Immediate Music to possibly be healthy." It has since grown to a 700+ page work of fanfiction involving (the author hopes at least) passable attempts at blending military science fiction with high fantasy, alternating between the two different elements trying to understand one another and Orcs and Dark Elves being shot in the face with 26th century assault weaponry.

The story was completed on 19th of January, 2011, and is available on two major sites. The first is at the Creative Writing Forum

of SpaceBattles.com with the full forty-six chapters, while a slightly more polished and proofread version can be found at Fanfiction.net