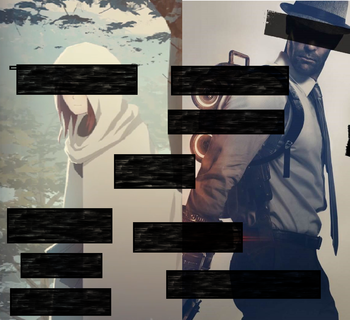 Left: Summer Rose. Right: William Carter.
Summer Rose had heard many theories about what happened to people on Remnant after death, and even believed in a few of them herself. But never in a million years would she have guessed that the afterlife took the form of a warm bed in a dimly-lit room.
And yet...that was exactly where she found herself.
Advertisement:

is a RWBY/XCOM Crossover fanfic written by Joey245

, envisioned as a fan-made Alternate Continuity Prequel to DrAmishMD's

RWBY Within series. As the title may imply, the story is heavily based on The Bureau: XCOM Declassified, with Summer Rose as the main protagonist.

Set in the 1960's at the height of the Cold War, a mysterious young woman with silver eyes shows up at a top secret military base just moments before it's attacked by an unknown enemy. This woman is named Summer Rose, and she herself has just arrived shortly after dying in the heat of battle with an immortal witch. The story follows both Summer and her unlikely ally, an ex-CIA agent with a troubled past named William Carter, as they become part of a noble (if shady) organization dedicated to fighting this alien invasion. The Bureau of Strategic Operations and Command (or XCOM) might be Earth's best shot at repelling the Outsider threat...but can Summer fully trust them, considering she is an alien herself?

The fic was originally published in July of 2019, and concluded in December of 2021.