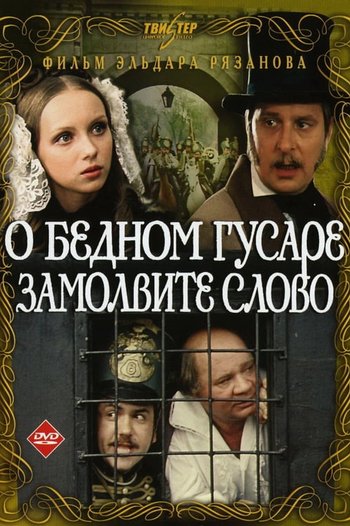 Say a Word for the Poor Hussar is a Soviet movie from 1980. It was directed by Eldar Ryazanov and featured an all-star cast, including Evgeniy Leonov, Oleg Basilashvili, Valentin Gaft, Georgiy Burkov, and many others.

Set in the middle of XIX century, the movie starts with an investigator of a very high rank arriving in a small town, following a report that a few hussars from the regiment currently stationed there were badmouthing the king. He invents a perfect — as he thinks — test that would show their true allegiance. However, the commander of that regiment, despite being only aware of certain parts of this plan, considers it a great dishonor for his men and devises a plan of his own. Things get complicated as neither plan works exactly as intended.

Caught in a crossfire are two actors from the local theater, a father and a daughter.

The film premiered on Soviet television on January 1, 1981, and wasn't shown again for several years due to Soviet censorship understanding it correctly.

Tropes in Say a Word for the Poor Hussar: