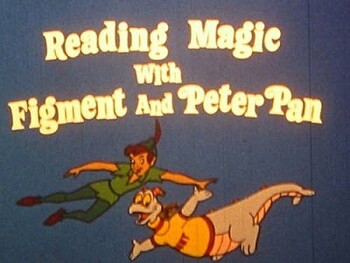 ''Come and join me in my travels
In the pathways of the mind
When you use imagination
There's no telling what you'll find.''
—Figment, the first verse of the theme song
Language Arts Through Imagination is an educational video series created by Disney Educational Media subsidiary EPCOT Educational Media and starring the purple dragon Figment of Journey into Imagination fame.
Advertisement:

Each of these shorts take place in a playhouse in the world of Figonia and focus on an animated Figment (Billy Barty) teaching 2 live action kidsnote  a kid and another Disney character in "Reading Magic With Figment and Peter Pan" and "Writing Magic with Figment and Alice In Wonderland" about basic concepts of reading and writing and how imagination plays a role in putting those aforementioned concepts into practice. Stock Footage of animated Disney films (as well as miscellaneous live action footage) was used to help illustrate the topics.

The series had 11 shorts created between 1988 and 1989, exclusively meant for use in elementary schools.

With the power of examples and the magic in your mind, you can trope anything you want to trope: