Film / The Man with Two Faces 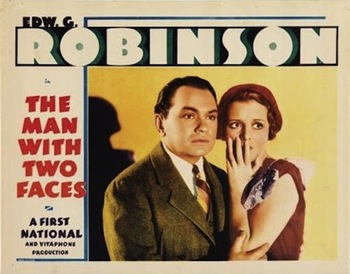 The Man with Two Faces is a 1934 crime film directed by Archie Mayo.

Damon Wells (Edward G. Robinson) and his sister Jessica (Mary Astor), are both stage performers, starring together in a play called The Dark Tower (no, not that one). Damon doesn't particularly like acting even though it's his career, and has come out of retirement only to support Jessica's comeback. It seems that some time ago she entered into a disastrous marriage with a criminal named Stanley Vance (Louis Calhern). After Vance was murdered by fellow hoodlums, Jessica suffered a nervous breakdown, and it has taken three years for her to recuperate well enough to mount a comeback.

The return of Stanley Vance immediately causes Jessica to fall into a zombie-like trance in which she robotically obeys Vance's commands but remains catatonic to everyone else. Damon once again faces the loss of his sister, as well as the loss of Jessica's 50% of the play. He takes drastic action.

Mae Clarke appears as Daphne, another actor in the play and apparently Damon's sex partner.