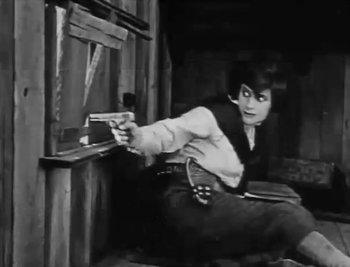 Something New is a 1920 film directed by, written by, and co-starring the film-making husband-and-wife team of Nell Shipman and Bert Van Tuyle.

Nell Shipman plays a writer very similar to Nell Shipman who goes off to Mexico looking for inspiration. One Sid Bickley, a partner in mining to Nell's late father, manages the Blue Lotus gold mine south of the border. Nell is smitten at first sight with Sid's new partner, Bill Baxter (Van Tuyle), but she goes off with Sid to see the mine.

Unfortunately for Nell and Sid, most everybody associated with the Blue Lotus mine has gone off to see the horse races in Tijuana. This is bad, because banditos led by the murderous Agrilla Gorgez swarm down on the mine to steal the gold. It's worse, because once Gorgez sees Nell, he starts getting other ideas.

Before she's kidnapped, Nell manages to scrawl out a note to Bill which she sends back tucked into the collar of Bill's dog. Bill gets the note, but since the banditos have stolen all the horses, Bill sets out with the only transportation he has—his trusty Maxwell automobile