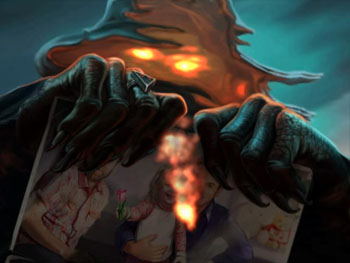 This could get ugly.
"Journey into the mysterious Nightmare Realm and save Emily from an imaginary world that has been taken over by darkness! "
— Big Fish Games [1]

A point and click adventure, this is the first in the Nightmare Realm series. The premise starts with a healthy amount of parental worries where you race to find your daughter, Emily, who has been spirited away by a dark shadow who had been following your family for the past 6 years to accomplish said aforementioned goal.

This HOG provides several examples of: