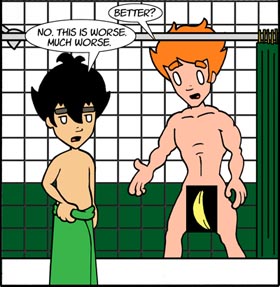 A typical day in the life of Greg.
Advertisement:

Greg was a Slice of Life webcomic about two best friends, Greg and Ted, both drastically different, getting into all sorts of comedic adventures during the course of their daily lives.

Greg updated every Monday, Wednesday, and Friday. With off-storyline strips updated Thursdays. The comic is no longer found on the internet and all links to it on TV tropes redirect to malware sites so proceed with caution.