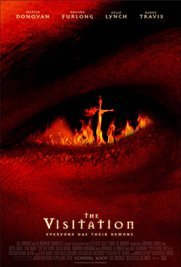 The 2006 film adaptation of the Frank Peretti novel of the same name, The Visitation tells the tale of Travis Jordan (Martin Donovan), a former minister in the town of Antioch, Texas, as he deals with the arrival of a mysterious stranger who calls himself Brandon Nichols (Edward Furlong) and does miracles to bring people to him. Travis is skeptical, both due to his ministerial background making him skeptical of false prophets and because he himself lost his faith on account of his wife's horrific murder three years before. Things start getting weird when he realizes that one of the three attendants to Brandon shows up in a crime scene photo from his wife's death, and he quickly becomes allied with Morgan, a single veterinarian who moved into town to provide a safer environment for her teenaged son, Michael, but is worried as Michael becomes more obsessed with the revivals that Brandon is holding on the Macon farm.

It soon becomes evident that Brandon is not an agent of God, but instead something much more sinister, and he is not going to take "no" for an answer, particularly when it comes to Travis.