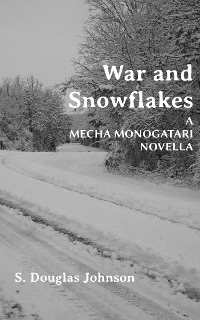 "Your attention, please: as of 4:45 p.m. today, the Self-Defense Force Regional Command in Sendai has declared a Class 5B special state of emergency for the coastal areas of the Aomori and Iwate prefectures."

War and Snowflakes: A Mecha Monogatari Novella is a Slice of Life science-fiction novella written by S Douglas Johnson, set in the same world as Stone King. On a winter day, Ordinary High-School Student Tsuruhara Iori must deal with a region-wide evacuation order and find shelter in an underground bunker. She finds herself in the company of one of her schoolmates, Aragaki Koji, who has a secret connection to one of the legendary titan pilots who have been deployed to defend their hometown.

A sequel, War and Cherry Blossoms, picks up a few months later, with Iori staying overnight at a remote vacation house with some friends, when she is awakened in the middle of the night to the sound of a battle nearby. A mecha crashes outside the house, and Iori, thinking it is a Japanese titan, goes out to see if its pilot needs any assistance. But it isn't a Japanese titan...

War and Snowflakes and War and Cherry Blossoms provide examples of the following tropes: