Roleplay / Roll To Roll To Dodge 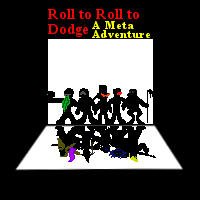 Our 'heroes'
"So far, our party includes an insane troper who has telekinesis and hallucinates ghost pirates with posh British accents and a double amputee burn victim janitor who beats people to death with a mop. And this is in the "real" world."
—Gatleos

A Roll to Dodge game with a unique premise, Roll to Roll to Dodge, A Meta Adventure was created by Gatleos on December 26, 2010 on the Bay 12 forums and may be found here

The story begins with five people waking up in a cell. They are promptly informed by a mysterious voice that they are going to be playing a very exciting game of Roll to Dodge. Meanwhile, in another Dimension, five people find themselves in a tavern.

What follows is an epic story of mass murder, insanity, and well thought out- then abruptly derailed- plot.

Roll to Roll to Dodge contains examples of:

The individual Universes provide examples of: