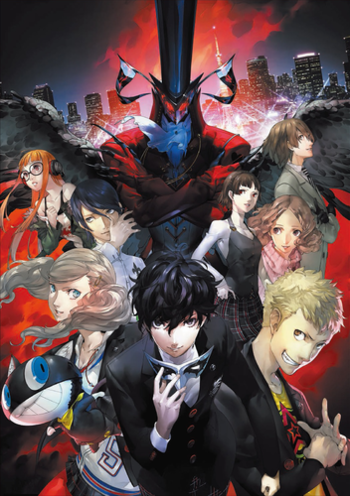 If you hold on, life won't change!note Clockwise from the bottom: Joker, Morgana, Ann Takamaki, Yusuke Kitagawa, Futaba Sakura, Arsène, Goro Akechi, Haru Okumura, Makoto Niijima, Ryuji Sakamoto.
The world is not as it should be.
It's filled with distortion, and ruin can no longer be avoided.
Those who oppose fate and desire change...
From time to time, they were referred to as Tricksters.
You are the Trickster.
Now is the time to rise against the abyss of distortion.
— Igor, Master of the Velvet Room
Advertisement:

Persona 5 is an Urban Fantasy Role-Playing Game, and the fifth numbered sequel in the Shin Megami Tensei JRPG franchise's Persona sub-series, developed by Atlus for PlayStation 3 and PlayStation 4. It is the first mainline entry in the Persona franchise following Sega's purchase of Atlus in 2013 and the first numbered Persona game to launch on multiple consoles. The game released in Japan on September 15, 2016, in Traditional Chinese on March 23, 2017, with an English dub in the Americas and Europe on April 4, and in South Korea on June 8.

It is the year 20XX. The world is not as it should be. In Tokyo, psychotic breakdowns and catatonic episodes are becoming more common amongst the general public, leading to a string of high-profile accidents and crimes. Public confidence in the government and justice system is falling, and the powerful elites of the city plot to turn these incidents to their advantage.

You are an Ordinary High-School Student who has been falsely convicted of assault and sentenced to a year-long probation in Tokyo. On your first day attending Shujin Academy, you and a fellow outcast accidentally stumble into a mysterious Mental World known as the Metaverse: a place where cognition becomes reality, and real-world locations are twisted by the thoughts of humans. Within this world, the most corrupt humans have subconsciously created mental fortresses called "Palaces" where their innermost vices and desires are allowed to run rampant.

It's not all hopeless, though — as one of this world's inhabitants explains, stealing the "Treasure" that forms the heart of the Palace will erase the owner's twisted desires, forcing them to confront the horrible things they've done. With the aid of a mysterious smartphone app and the inner-power of "Persona", you decide to use the Metaverse to strike back against the rotten society that cast you out, forming a crew of Phantom Thieves dedicated to stealing Treasure and forcibly reforming the corrupt.

But that's not all. Beneath the Palaces is "Mementos", a twisted labyrinth created from the amalgamated thoughts of the entire city. Between jobs, you and your companions journey into Mementos to halt corrupted desires before they become sinister enough to warrant their own Palace. With each corrupted heart taking you further and further in the depths of Mementos, you begin to wonder; is it truly a never-ending maze? Is there a bottom to this pit? And if there is, what's down there?

Persona 5's core gameplay is a refinement of the formula established in Persona 3 and Persona 4, with the game being evenly split between turn-based dungeon-crawling and Dating Sim-esque social simulator. However, a few elements from the first Persona and Persona 2 also make their return (though these elements themselves were originally conceived in the main Shin Megami Tensei series); all party members are able to use both melee weapons and firearms, and you can negotiate with enemies for Personas, money, or items. The Social Link system (now renamed to Confidants) has been upgraded; almost every Confidant has unique perks and abilities that are unlocked as you advance them. Additionally, the dungeon-crawling itself been overhauled; the main Palaces are all 100% pre-made instead of being randomly generated, and feature platforming, puzzles, stealth, and traps, making them much more elaborate than previous games' dungeons. The one exception is Mementos, a sprawling randomly-generated Palace which serves as the main setting for sidequests.

An Updated Re-release, Persona 5 Royal, released for the PlayStation 4 on October 31, 2019 in Japan and on March 31, 2020 in the West. The game features several new additions; such as new areas, new enemies, revamped Palaces, a new party member (Kasumi Yoshizawa), new Confidant (Takuto Maruki), a new Palace, new character portraits for every character, various quality of life features, and new story events set immediately after the main events of the original game. The game also features graphical enhancements on the PS4 Pro. It is set to come to PC (on both Steam and Windows Store), PlayStation 5, Xbox One, Xbox Series X|S, and Nintendo Switch, marking the first time a mainline Persona title is available on non-Sony consoles, on October 21, 2022.

You are held captive... a prisoner of Tropes.

"Your rehabilitation begins now. Welcome to my Velvet Room."
Feedback

Example of:
This Is a Work of Fiction