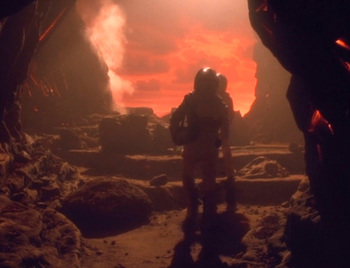 Let's land on it and walk around!
Voyager is desperately low on fuel and Captain Janeway orders all nonessential systems to be shut down. Seven of Nine uses the astrometric sensors to detect a planet with deposits of deuterium, but the planet is a "Class Y" or "demon" planet, extremely hostile to humanoid life. When the initial effort to transport some deuterium to the ship fails, Harry Kim and Tom Paris go down in a shuttlecraft to retrieve some. There they discover that the deuterium is in a liquid form and somehow is able to stay in a very cool temperature. Unfortunately, their environmental suits start to fail, and both Tom and Harry run out of oxygen before they could reach the shuttle.
Advertisement:

Above the planet, Janeway on Voyager hasn't heard back from the Away Team in a while and decides that the crew should land the ship on the surface to find them, despite the fact that in doing so they could risk not being able to lift off again. Another Away Team, this time Chakotay and Seven of Nine, is sent to explore the surface in environmental suits when they discover Tom and Harry are alive, though now somehow able to exist on the planet without environmental suits. Chakotay and Seven bring the other two on board and The Doctor discovers that they have been bio-formed to exist on the planet, with a silver liquid that has somehow been injected into them. However, because Voyager cannot replicate the environment of a Demon-class planet, that would mean that Tom and Harry would have to be left behind if they can't be restored to normal.

As Harry, Chakotay, and Seven return outside to search the area, they eventually come across...Tom and Harry still in their environmental suits. Around the same time, Voyager is being sunk into a rising pool of silver liquid. Janeway eventually learns that this liquid called "silver blood" is somehow able to duplicate whole beings from sampled DNA. Realizing that they have allowed this "silver blood" to become sentient beings that desire to live in physical bodies, Janeway allows it to duplicate the entire crew, leaving behind an entire group of humanoid beings that are capable of living on a Demon-class planet by the time Voyager leaves.