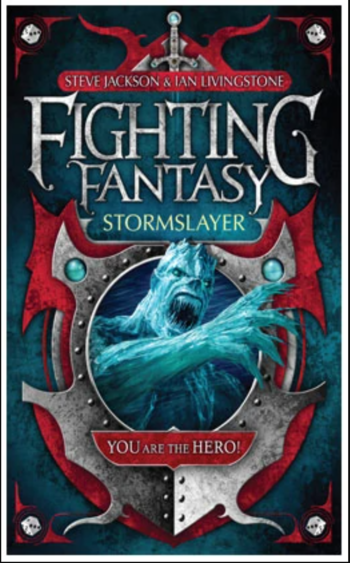 We will, we will, rock you!

Stormslayer is the 63th entry of the Fighting Fantasy series of gamebooks written by Jonathan Green, illustrated by Stephen Player.

The Kingdom of Femphrey, in the world of Titan, is being wrecked by storms, blizzards, cyclones, and weather anomalies of all sorts. There are dark powers, fearsome magic that harnesses the destructive might of Nature. And with the passing of each day, the increasing power of storms further threatens the existence of Femphrey.

All these comes from the powers of Balthazar Sturm, a Weather Mage and once a proud student of the Academy of Naval Sorcerers; banished by the Council of Wizards over his ambitions, Balthazar had returned to seek revenge, by unleashing his powerful, dangerous, weather-manipulating sorcery throughout the lands. Only you, a warrior and the Hero of Tannatown, can stop Balthazar by in filtrating the mad sorceror's ship, The Eye of the Storm, defeat Balthazar, and prevent Femphrey's destruction...

One notable factor about the book is an additional stat, called "Time", which allow players to keep track of through a calendar. Each and every day is represented by a single element, including Seasday, Stormday, Fireday, Earthday, and Highday, where each day will be reflected in the changing of stats in certain enemies, and the player themselves. And of course, the amount of days taken by a player will reflect the difficulty of the final battle.