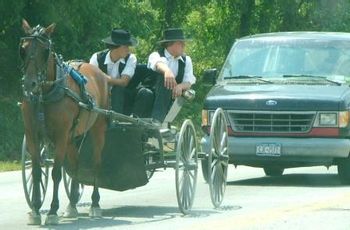 Quit honking, it's only got one horsepower!
Advertisement:

This is where something is much like the past, either preserved through isolation or deliberately re-created, but definitely existing in the present day. No time machines here! Many real-life and fictional theme parks will play on this trope. Some take it to greater extents than others. In fiction, you can expect an Adventurer Archaeologist to discover a Lost World with supposedly extinct species still living. See also Retro Universe, where the whole world is like this, although somewhat more likely to incorporate history-flavored versions of present-day technology or sensibilities.