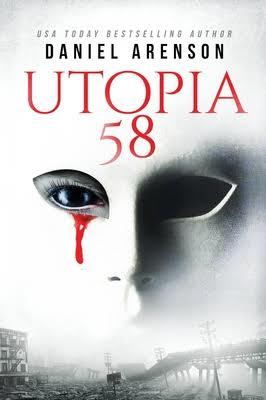 Utopia 58 is a 2019 post-apocalyptic novel, heavily inspired by 1984, written by Daniel Arenson.

Several years into the future, most of planet earth has evolved into the Equalist Empire, the titular Utopia 58- so named because it is the fifty-eighth attempt at a communist paradise- where everyone and everything is designed to be equal. There are no genders, no ages, no colors, no names, and no differences between any individual of any kind. All must wear white robes, masks, and voice mudulators to disguise themselves from one another. Anyone who doesn't abide by these rules can and will be punished, even if it means imprisonment or death, and even forbidden thoughts are punished via electrocution. The Father, a man shrouded in mystery but who is said to be the creator of the universe, rules over the empire with his elite, ensuring no one rises above their position.

In the nation known as the People's Republic of Isonomia, a middle-aged man known as KB209, or Kay, is attending one of the weekly rallies in the city, along with thousands of other individuals, in which they praise the Father while expressing hatred for a noble known as Bialik and his sinful nation of Zion, the primary enemies of the state. While there, he discovers a woman named Ellie rebelling against the Equalist Empire by wearing nail polish. After Kay meets Ellie and knows more about her, he finds out that she's part of a rebellion currently at war against the Equalists. Kay ends up fighting for his life as he and Ellie try to escape Isonomia and reach Zion, which Ellie explains is really a safe haven far away from Isonomia where rebels like Kay and Ellie can life a happy, colorful, fulfilling life without being judged for their differences, all while the White Army and the sadistic White General, EQL61, hunts them down on the Father's orders.