Script / The Twilight of the Superheroes 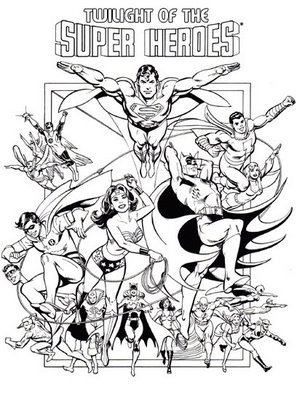 Waiting for Twilight note The Tag Line Alan Moore himself proposed to DC for marketing use
Advertisement:

In 1987, before his split from DC Comics, Alan Moore proposed a dark comics crossover called Twilight of the Superheroes.note While it appears to reference 1992's The Death of Superman, it's more likely Moore was referring to the original Death, a 1961 imaginary story where Lex Luthor genuinely killed Big Blue. While the story was never published, the original proposal was leaked online and gained popularity as a "might have been" story penned by one of comicdom's biggest stars.

The background as outlined stems from Moore's ideas about Crisis on Infinite Earths and the Post-Crisis world. He noted that while it could resolve continuity problems in the short run, eventually they would run into the same issues again in the future and that in many ways, the loose many-worlds alternate-universe division between Golden Age and Silver Age Batman and Superman gave more options for writers. Moore's solution was inspired by Frank Miller's Batman: The Dark Knight Returns, which he noted gave Batman an ending and finally raised him to the level of myth and also settled continuity issues by proving that it's such a good story it doesn't matter finally what its position in the continuity is. Moore stated that without the element of time, comic books can never become true legends since the nature of Comic-Book Time, Status Quo Is God and Failure Is the Only Option prevented the characters from growing old, having the final battles and betrayals common to the Norse Myths, Robin Hood or Sherlock Holmes stories that ultimately defined those characters. He proposed a Crisis Crossover that was structured in such a way that it left room for writers to either add/subtract or ignore altogether and free up many issues of writing in continuity while at the same time adding a level of myth and purpose to the entire DC Universe.

The story's Framing Device features a future version of John Constantine traveling back in time to warn everyone of an impending disaster. As he explains to his younger self in a bar, the world will eventually become a dystopia ruled by a number of superhero dynasties, such as the House of Justice and the House of Titans. Superman and Captain Marvel — rulers of the most powerful dynasties, the House of Steel and the House of Thunder — arrange a political wedding between their children to combine their power. Since the union threatens to destroy the status quo, the other houses begin planning to crash the wedding and seize power for themselves. But little does anyone realize that the future Constantine has his own plans for the wedding, and they're all playing right into his hands...

It's worth noting that a number of the concepts used in the proposal, such as the restoration of the DC Multiverse and DC characters living in a dystopian future, would go on to be used in other DC stories.

The proposal can be read online