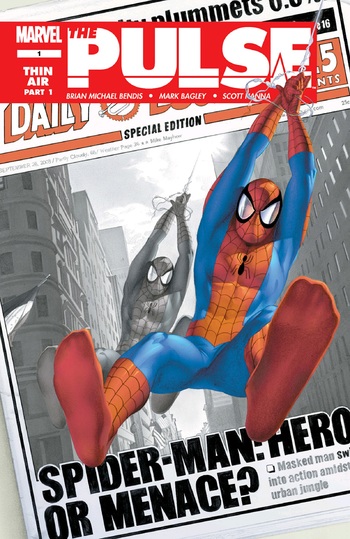 The Pulse is a fourteen-issue (April, 2004 - May, 2006) Marvel comic series by Brian Michael Bendis and several artists that continues the story of Jessica Jones from Alias. A short time after she told Luke Cage that she is pregnant with their child, Jessica is asked to talk with notorious anti-vigilante media hawk J. Jonah Jameson. Turns out the Daily Bugle isn't doing so hot and Jonah, even though he doesn't like the idea, is willing to give expanded coverage to the "superheroes" if it will save the paper he loves. To that end, he wants to hire Jessica as a "vigilante analyst", someone who can give insight into the goings-on of the superhuman activities that "The Pulse", as the new section will be called, is going to focus on.

Her first day on the job, however, is complicated by the murder of a new Bugle staffer at the hands of an unknown superhuman, and it doesn't really get any easier from there. The series primarily follows Jessica and Luke through the pregnancy, and also deals with the aftermath of the Nick Fury-led "Secret War". Like Alias, it focuses more on character development and storytelling than fights or action sequences, though it has several of those.