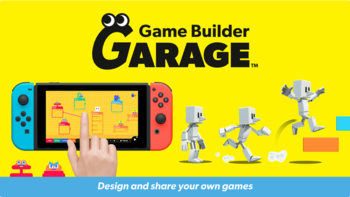 Learn to make games from the minds at Nintendo!
Nintendo developed an interest in developing software that centered around building and development around the late end of The New '10s with the development and release of Nintendo Labo. One of the features of those four kits was a mode called the "Toy-Con Garage", a Game Maker studio with a built-in visual Programming Language which effectively allowed for the creation of entire video games but was very complex and intricate, making it difficult for amateur players to use.
Advertisement:

First announced on May 5, 2021 and released on June 11, 2021, Game Builder Garage is effectively a standalone counterpart to Labo's Toy-Con Garage, but with a vast suite of tutorials included to explain how to use the software to develop video games. The first trailer for the video game showed gameplay of a simple platformer as well as a space shooter but hinted that games of effectively every genre can be made. The software also includes a sharing feature to share games online. The game has support for all controllers and their features along with support for a USB mouse and keyboard.

This game builds upon the following tropes: