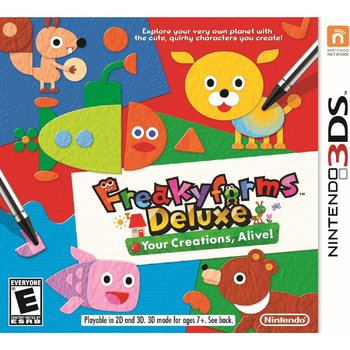 Freakyforms: Your Creations, Alive! is a video game developed by Asobism and published by Nintendo. The game was released via the Nintendo eShop on September 7th, 2011 in Japan and all other regions on November 10th.
Advertisement:

In the games, the player creates creatures known as "Formees" out of various shapes, bits and bobs. The player is then encouraged to explore the game's worlds completing tasks for other non-playable characters.

Despite receiving mixed reviews, the game apparently did well enough that it earned a retail sequel entitled Freakyforms Deluxe: Your Creations, Alive!

, with the addition of dungeons, which involves the king getting kidnapped and your Formee has to rescue him from various boss Formees.