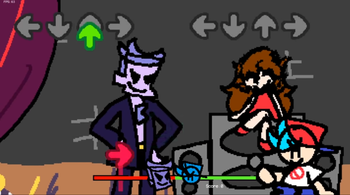 It's as awful as it looks.
Advertisement:

was a Friday Night Funkin' Game Mod originally made by Youtuber "Chocolatte with a side of milk" that, as its title suggests, was very bad.

The art style was intentionally awful and possessed poor MS Paint quality, while the vocals of every character were all sung by one voice actor and horribly off-key at that. Despite its intentionally dreadful quality, its strange charm made it quite popular, resulting in a plethora of other modders creating their own "bad" versions of other mods, such as The Tricky Mod and Vs Whitty.

After the creator was exposed for drawing NSFW art of a minor(among other things), the mod was deleted and discontinued, with the creator deleting all of their social media.