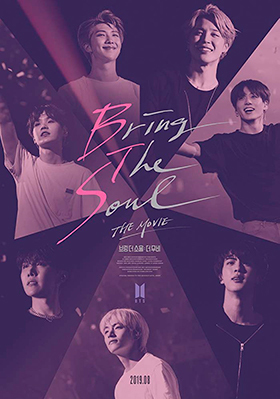 The movie official poster. note Clockwise from top-left: RM, Jimin, Jungkook, Jin, V, j-hope, and SUGA.
Je t’aime plus qu’hier mais moins que demain.note "I love you more than yesterday but less than tomorrow."
— Quote from L' éternelle chanson by Rosemonde Gérard, used in the movie and the trailer.

A year after Burn the Stage (which chronicled the WINGS Tour in 2017), Korean group BTS brings us another Rockumentary film, now chronicling the LOVE YOURSELF Tour from 2018. Like the Burn the Stage movie, Bring the Soul was an event release, opening in cinemas worldwide in August 7th, 2019.

This documentary film differs from Burn the Stage by taking on a Lighter and Softer tone and a wildly different approach. While Burn the Stage had more traits of a film essay and reflected on the fleetingness of fame and happiness, Bring the Soul is far more straightforward, starting with the BTS members settling to dine in a hotel in Paris the day after the last concert of the tour, and jumping back and forth from there to the chronological events of the LOVE YOURSELF Tour as the members reminisce about them in their dinner conversation.

Some weeks later, a documentary miniseries of the same name was released on the Weverse app, where the film is also available.

The Bring The Soul movie contains examples of: