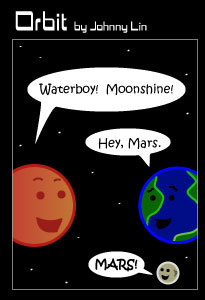 is a webcomic by Johnny Lin about the adventures of the planets, moons, and other objects in space, all of which are anthropomorphized.

Except Earth is starting to get a little stir crazy. With such a huge universe out there, why does he have to be stuck in this puny solar system? There has to be more to life than just spinning around in circles... right?

Meanwhile, Nix is dealing with Pluto's 'issues' after his demotion the way a supportive moon should... which means, essentially, trying to find someone, anyone else who'll let him tag along with them. And oh yeah, Mercury's planning to coup, the dwarf planets want more respect, Comet is stopping by from Andromeda... Maybe Earth has a bit more to pay attention to than he's giving credit to.

It's essentially an abandoned comic now, after the author said that he wanted to draw something more challenging than circles to improve his art skills.