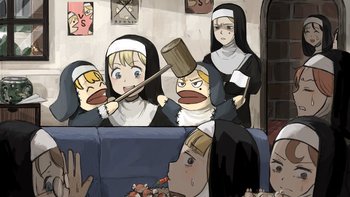 Her puppet show has an unfortunate visitor. note  Clockwise from top right: Emmie, Isabel, Pacifica, Eulalia, Marisol, Floriana, Diana.
"Lord Jesus Christ, we thank you for making Abbess Maria our Mother Superior! Please protect her and take care of her, and take care of us! Things might be bad in the world right now, but as long as we're all together I still have hope, because You are with us. In the name of God we pray, Amen."
— Sister Floriana "Flori" Alonzo

Sister Floriana is a fanfiction on Wattpad by Robert Mitchell chronicling the lives of young novices in a Spanish Monastery during the war. The story is based off of and takes inspiration from a series of drawings by Diva

which depict nuns in an Animesque style, getting into hijinks and misadventures. (With the exception of the cover, which is by SHIHO

Sister Floriana is a 17-year-old novice, living in the Cristo el Rey (Christ the King) Monastery, along with her friends; the only sane woman, Sister Eulalia, who is also her best friend; Cute Bookworm Sister Pacifica who loves drawing and painting; Brainless Beauty Sister Carmen, who's incompetent at most things that don't involve domestic housework; the Meganekko, Sister Marisol; and Sister Diana, who resents being treated like the novices, despite having taken her Temporary Vows.

Helping the monastery run, while making sure it doesn't fall apart at the seams is Father Alvadeo, almost never seen without his Lennon Specs, and the Mother Superior Maria, who can't help but spoil the girls under her care.

Each story is tailored to the drawing, and can be found in its entirety here

. It's currently on an indefinite hiatus, to allow the author to work on his original projects. A compendium of the original drawings is being published through Kickstarter and can be found here.

Leo: It's not like you think. It's bad out there. I would feel differently if we were fighting another army. A real army. Not whatever the Republicans have scrounged together. They're barbaric, and what they make us do is barbaric. note  The Republicans recruited women and adolescents to fight for them in the trenches.