Literature / The Last Temptation of Christ 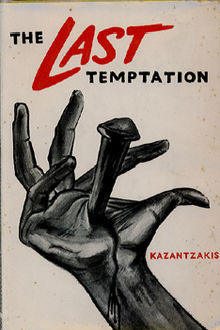 The 1955 novel by Nikos Kazantzakis is an alternative interpretation of the story of Jesus' life and death in the four Gospels. The novel was written in a stylistic modern Greek called Demotic, which was the common language of the Greek peasantry, rather than the elitist literary language. The English translation was published in 1960.

The novel presents Jesus as being subject to the same weaknesses, flaws, and desires as other humans, and a charge to die and suffer all the sins of the world on top of it. Unlike the movie, the novel spends quite a lot of time on the equally flawed lives of the Apostles, Jesus' family, and others. And all the while, Jewish resentment of Roman rule simmers in the background and shadows Jesus' life.

It was famously adapted into a film by Martin Scorsese in 1988.