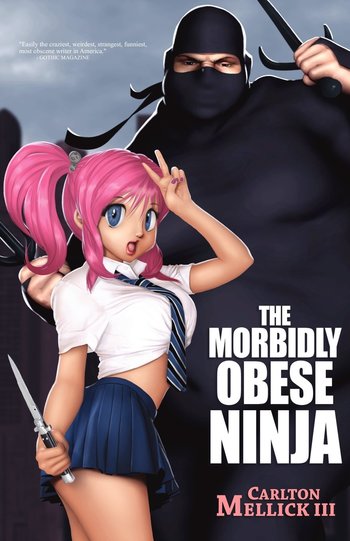 These days, if you want to run a successful company... you're going to need a lot of ninjas.

Neo Tokyo, California is a city built so high that none of its residents have ever seen the ground. It is a place where citizens cosmetically alter their bodies to look like Japanese anime characters. It is a place where ninja battles determine the fate of corporate business ventures. It is the home of Basu, a 700 pound killing machine who uses his grotesque excess weight as a deadly weapon. In this city, there is no ninja more deadly than Basu. He's well-trained, well-armed, and well-fed. And if you work for one of his competitors, he's coming to kill you.

The Morbidly Obese Ninja is a work of Bizarro Fiction by Carlton Mellick III.