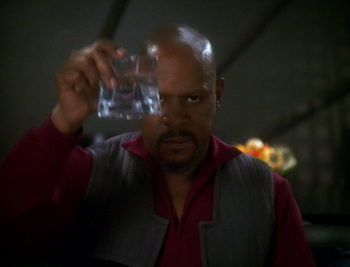 "But the most damning thing of all? I think I can live with it... and if I had to do it all over again... I would."
Sisko: Every Friday morning, for the past three months, I've posted the official list of Starfleet personnel killed, wounded or missing in the war. It's become something of a grim ritual around here. Not a week goes by that someone doesn't find the name of a loved one, a friend or an acquaintance on that damned list. I've grown to hate Fridays.
Advertisement:

Sisko is dictating his personal log to justify the actions he's taken over the past two weeks. We flash back to two Fridays prior, when Dax and Bashir lament the friends they've spotted on the latest casualty reports. The Cardassians are cutting through Romulan space without permission to attack Federation planets, and the Starfleet officers wonder what it will take for the Romulans to break their non-aggression treaty and join against the Dominion. Narrating his personal log, Sisko says that at that moment he became determined to bring the Romulans into the war.

Sisko and Dax reason out that before the Romulans will take a side, they'll demand concrete proof that they will be next in the Dominion's crosshairs. Sisko enlists Garak to use his connections to find proof on Cardassia. While Garak works, the Dominion invade Betazed, making the situation worse than ever. Worse still, Garak reports back that all of the operatives he's contacted have been swiftly assassinated. The former spy says that their only option is to manufacture evidence themselves. In spite of his misgivings and the catastrophe that would result if their ruse fails, Sisko agrees to this desperate plan.

Garak proposes sending an invitation to the Romulan Senator Vreenak (Stephen McHattie), the most hardline supporter of the treaty, and present him proof of a planned Dominion surprise attack. If he's convinced, then the Senate will follow. To create the fake records, they'll rescue a certain counterfeiter Grathon Tolar from a Klingon prison. And to sell the counterfeit's authenticity, they'll purchase a Cardassian optolythic data rod to put it on. His misgivings growing, Sisko nonetheless agrees to Garak's proposal, pending Starfleet approval.

Sisko takes custody of the odious Grathon Tolar and brings him to the station. When Tolar stabs Quark in the bar, Sisko offers Quark a bribe to avoid filing a criminal complaint, causing the surprised Ferengi to confirm that Every Man Has His Price. To purchase the optolythic data rod, Sisko must force Bashir against his strenuous objections to hand over 85 liters of bio-memetic gel, a highly controlled and dangerous substance. But all of this work pays off when Tolar produces a fake briefing between Weyoun and Damar in which they plan a surprise attack on Romulus. Sisko is satisfied with the results and orders it embedded into the rod.

Senator Vreenak makes a clandestine arrival on Deep Space Nine on his way back from Soukara. Already declaring the war against the Dominion to be a lost cause, he insists on seeing evidence of a Dominion betrayal just as Sisko and Dax predicted. While Garak pokes around Vreenak's ship, Sisko shows him the fake recording, and the dubious senator insists on inspecting the rod further before making any decision. Sisko knows that the fate of the Alpha Quadrant rests on whether Vreenak buys the deception. When the senator summons Sisko again, he holds up the rod and snarls, "It's a fake!"

The senator promises to tell everyone on Romulus about Sisko's ruse. So the captain must accept that not only were his conscience-testing efforts All for Nothing, but they will all but destroy any hopes for diplomacy with the Romulans. Next Friday, as Sisko grimly delivers the weekly casualty reports, Worf comes in to report one specific casualty: Senator Vreenak, whose shuttle exploded after "leaving Soukara." It doesn't take very long for Sisko to realize that Garak hid a bomb on the senator's ship while it was docked. In a fury, he rushes over to Garak and punches him out.

Garak manages to calm Sisko down long enough to explain himself. The bombing of Vreenak's ship with the data rod on board will look like a Dominion assassination to erase the evidence of its planned surprise attack. The damage to the rod will mask the imperfections that originally revealed it to be a forgery. Garak also hints that he killed Tolar to further cover their tracks. The spy argues that their plan has worked, and they've saved the Alpha Quadrant at the expense of one Romulan Senator, a criminal, and Sisko's own conscience. And that, Garak declares, is a bargain.

Returning to the present, Sisko closes his personal log by asserting that he did what he had to do. He stiffly cheers himself for winning the war and finishes up by asserting that he can live with what he's done. After a moment, however, he adopts a more pensive pose and asserts with less conviction that he can live with it, as if trying to convince himself. Then, of course, he orders that his entire self-incriminating personal log be promptly erased.

That's Why You Came to Me

In "In the Pale Moonlight," Sisko backhands Garak after learning that he was responsible for the death of the Romulan senator Vreenak, and lands another blow after figuring out that he killed the forger Tolar as well. But, as Garak points out, Sisko came to him in the first place precisely because, having tried everything else, he needed somebody that was willing to do whatever it took if he was actually going to draw the Romulans into the Dominion War.

Example of:
Bad Guys Do the Dirty Work

That's Why You Came to Me

In "In the Pale Moonlight," Sisko backhands Garak after learning that he was responsible for the death of the Romulan senator Vreenak, and lands another blow after figuring out that he killed the forger Tolar as well. But, as Garak points out, Sisko came to him in the first place precisely because, having tried everything else, he needed somebody that was willing to do whatever it took if he was actually going to draw the Romulans into the Dominion War.