Literature / Search by the Foundation 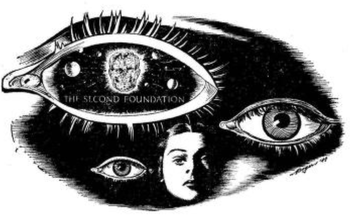 DARELL, ARKADY novelist, born 11, 5, 362 F.E., died 1, 7, 443 F.E. Although primarily a writer of fiction, Arkady Darell is best known for her biography of her grandmother, Bayta Darell. Based on first-hand information, it has for centuries served as a primary source of information concerning the Mule and his times... Like "Unkeyed Memories", her novel "Time and Time and Over" is a stirring reflection of the brilliant Kalganian society of the early Interregnum, based, it is said, on a visit to Kalgan in her youth...
— ENCYCLOPEDIA GALACTICA, 116th edition, published in 1020 F.E.
Advertisement:

First published in three parts as "...And Now You Don't" in Astounding Science Fiction (November 1949, December 1949, and January 1950 issues), by Isaac Asimov. This Science Fiction Novella is the eighth work published in The Foundation Trilogy, taking place sixty years after the events of "Search by the Mule". In 2001, it earned third place in the 1951 Retro Hugo Award Novella category. Arkady is his second female Foundation protagonist, and at fourteen, she's also his youngest.

Arkady, much more interested in the potential for adventure than she is in staying home, stows away with Homir Munn, who is on his way to Kalgan to begin the search for the Second Foundation. Meanwhile, Dr Darell designs anti-telepathy devices and the First Citizen of Kalgan, the new would-be Galactic Conqueror, plots for war. Dr Darell is only partway through his design for a weapon against Psychic Powers when Kalgan declares war against the Foundation and Arkady only barely manages to escape for Trantor with Preem Palver and his wife, a pair of farmers. Torn between his work and wanting to find his daughter, Dr Darell chooses to stay on Terminus, and worries that despite everything, he's playing into the predictions/manipulations made by the Second Foundation.

While Kalgan's invasion is ongoing, Arkady worries about what she can do to help her father know she has found where the Second Foundation is hiding. She convinces Preem Palver to travel to Terminus as part of a fleet to carry foodstuffs the planet needs, and asks the man to carry a message to her father. Palver reaches the frontline just as the Foundation's fleet prepares for battle. With a perfectly timed tactical ambush, the Foundation handily defeats Kalgan, shattering the latter's morale and forcing them to request peace terms.

Anthor reveals that Darell was right: the Second Foundation was centered in Terminus, with agents spread across the Galaxy to push forward their plans. Since Anthor knows their identities, they can arrest them and keep them from ever becoming a threat. When Arkady returns, her father tests her and reveals she has not been controlled by the Second Foundation, marking the Foundation's freedom...

...or not: everything had been planned out by the Second Foundation's First Speaker, Preem Palver. Arkady had been manipulated at birth so she would make that logical leap at the exact moment without risking detection. Kalgan's war with the Foundation had been engineered to restore the latter's confidence, and Pellas Anthor's role was to incite suspicions at the right point to make the Foundation believe they had uprooted the Second Foundation, thus ensuring they would continue with Seldon's Plan without expecting others to carry them towards the goal.

In 1952, "Search by the Foundation" was revised and included as the second half of Second Foundation.

"Search by the Foundation" provides examples of:

Alternative Title(s): And Now You Dont