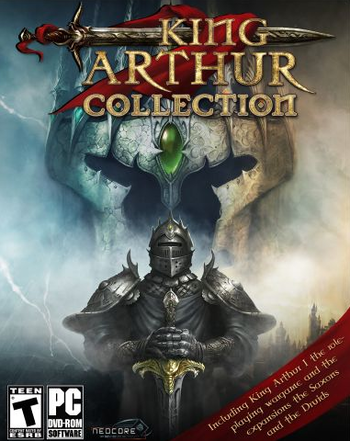 King Arthur: The Role-Playing Wargame is a 2009 PC release by Neocore Games based on the exploits of King Arthur, chronicling his rise to power in a Britain divided among bickering kingdoms.
Advertisement:

The game itself is a mix of strategy (in the vein of the Total War series) and role-playing. It also features hero characters that lead the armies and level up in a manner similar to RPGs. The gameplay of the main campaign more strongly favors the real-time battles with its units' varied capabilities and heroes' magic compared to Total War's empire management, with the gameplay following hardcoded plot quests that your armies undergo rather than players going about their conquering goals entirely of their own accord. However, the 2 DLC campaigns (featuring the Saxons and the Welsh, respectively) offer a sandbox experience, along with some gameplay changes as compared to the main campaign. The first game also offers multiplayer skirmishes, where 2 players can craft their own armies and fight against each other. The Fallen Champions stand-alone expansion is essentially a skirmish pack (with fixed armies for both sides), which serves as the bridge between the original and the sequel.

While obviously based on Arthurian mythology, it diverges rather widely from versions of the myths. It also features a morality axis that tracks the player's decisions and whether they tend toward Rightful or Tyrant and Christianity or The Old Faith, unlocking new units, hero spells and passive benefits based on these leanings.

It has a 2011 sequel, which has Arthur becoming gravely wounded in a magical attack, and his son-cum-heir has to re-unite the kingdoms and deal with supernatural threats, the Fomorians. The sequel also has a DLC ("Prologue") campaign featuring a version of a Roman colony left behind after the Roman retreat from the province. Compared to the original, II no longer offers multiplayer skirmishes, and greatly simplifies kingdom management, thus skewing the focus greatly towards "role playing".

In April 2022 Neocore released King Arthur: Knight's Tale, a tactical RPG that borrows many themes and plot elements from this game, this time featuring Mordred as the protagonist, taking place this time after Arthur's death.

The game makes use of the following tropes: