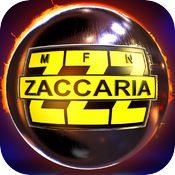 Zaccaria Pinball is a digital pinball game released in 2013 for Apple's iOS devices and Android phones by A.S.K. Homework, the Hungarian developers of Pure Pinball and Dream Pinball 3D. A Windows PC version was released on Steam on June 16, 2016 as an Early Access title.

Similar to The Pinball Arcade and Zen Pinball/Pinball FX, Zaccaria Pinball is a platform for downloading and playing emulated versions of famous Physical Pinball Tables from Italian pinball manufacturer Zaccaria. The pinball tables are rendered as real-time 3D models, allowing for variable camera angles, and players can choose between "arcade" and "simulation" modes for more realistic (and harder) gameplay.

The game comes with Time Machine; in-app purchases provide additional tables, along with membership packages and options to change the ball size, adjust the physics rules, set their own camera angles, and apply various lighting effects.

Zaccaria Pinball is available both as a free version and a "Master Edition"; the only difference is that the Master Edition includes four more tables — Blackbelt, Farfalla, Hot Wheels, and Pinball Champ '82.

The following is a list of all 38 pinball tables for Zaccaria Pinball (in alphabetical order):