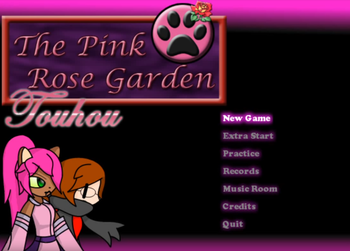 Pink Rose Garden Touhou is a Bullet Hell Shoot 'Em Up, made in 2012 by followers and friends of Let's Player Pink Kitty Rose. The game is a collective effort of the members of her now-defunct forums. As the name suggests, the gameplay is inspired by the Touhou Project series. It also has an alternate mode, called Extra Mode, with gameplay mostly inspired from Akai Katana and the DonPachi franchise.
Advertisement:

The game lets you play as Pink or her friend Black Raiden, as they attempt to quell some sort of rebellion. It's pretty vague, and the game overall doesn't take itself seriously. Extra Mode goes a step further in that it has no plot or dialogue to speak of.