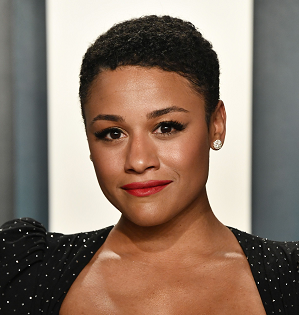 DeBose started her career on the stage, accruing ensemble credits as part of the Broadway ensembles of Bring It On, Motown: The Musical and Hamilton. She's lent this theater background to film adaptations of stage musicals such as The Prom and West Side Story (2021).

She won the Academy Award for Best Actress in a Supporting Role for her performance as Anita in West Side Story, becoming the first openly LGBTQ actor to win an Academy Award.note Other LGBTQ actors had won Oscars before her, but their sexual orientation was not widely known at the time.

She is also the third actor to win an Academy Award for playing a character previously played by someone else (in this case, Rita Moreno in West Side Story (1961)) who had also won an Academy Award for playing that role, and the first female actor to do so.note The first two pairs of actors to achieve this honor are Marlon Brando and Robert De Niro, who played Vito Corleone in The Godfather and The Godfather Part II respectively; and Heath Ledger and Joaquin Phoenix, who played The Joker in The Dark Knight and Joker, respectively.