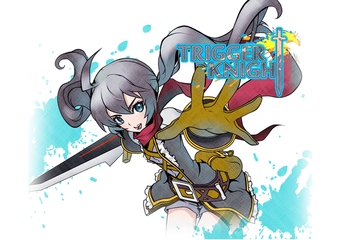 is an experimental survival RPG game where the Knight is running through an endless field for some reason, killing increasingly powerful monsters and doing her best to survive another day. The game mechanics are simple: when in battle, click to use items; outside of battle, click to use money at various buildings. Attack is automatic, the Knight's life is measured in days before she fades out of existence, and the enemies constantly take off large amounts of health.