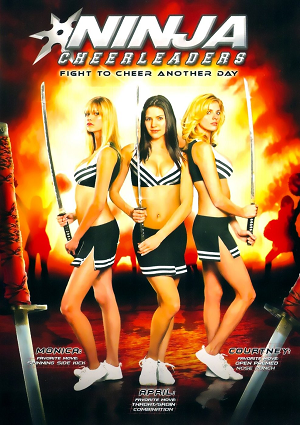 Cheerleaders go up against the mob. No, really.

April, Monica and Courtney are three intelligent high-school girls who have intentions of going to Brown. They are also ninjas who work for the kindly old sensei Hiroshi. They moonlight as Go-Go dancers in Hiroshi's own club. Yeah.

The bad guy is one Victor Lazarro, a mobster who has just recently been paroled. See, Hiroshi bought the strip club from the IRS, who took it from Lazarro when he was convicted, and now he wants it back. To that end, he hires his girlfriend Kinji, a "dark ninja", to dispose of the three ninja cheerleaders and ensure that the deed to the club is signed over to him.

Also in the mix is Detective Harris, a detective investigating (presumably) the disturbance that opens the movie.