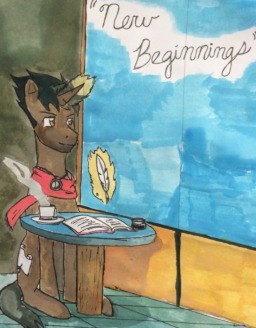 New Beginnings is a My Little Pony: Friendship Is Magic fanfiction by the author Hiver, following the life of former human Blank Page as he adjusts to life in the magical land of Equestria. Despite the rather cliche description, it is a well-written Slice of Life, with short 1 to 2 thousand word chapters. It is written in a fusion Scrapbook Story format and regular prose, though the 6 sequels use prose exclusively.

The sequels are called Normal Life, Consequences, Secret of Flying, Responsibilities, Duties, and Complications respectively. All are finished.

The whole series can be found here