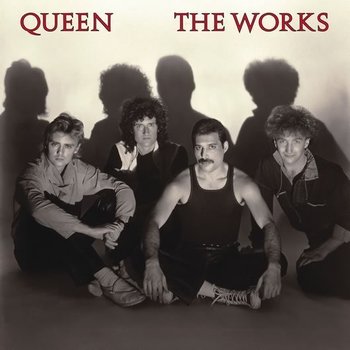 The Works is the eleventh album by Queen, released on 27 February 1984. After the 1982 release and touring of the ill-fated Hot Space, Queen briefly went on hiatus as the members pursued side projects, which included Freddie Mercury's Mr. Bad Guy and Brian May's supergroup releasing Star Fleet Project. They reconvened on August 1983 in Los Angeles to start work on the new album, the first time that the band recorded in the United States. Ironically, due to their fall-off in popularity in America, they opted not to tour there for the first time. While continuing on with synthesized music and funk influences, there was also a return to the classical rock elements; as the recording began Roger Taylor made the comment "Let's give them the works!", thus the name. The album didn't sell as strong in the United States as their past output, but it remained popular in Europe, selling more than six million copies and spending a record 94 weeks in the UK Albums Chart.

Queen had just completed their tour in support of this album when they were called up to perform at Live Aid; as a result, their two biggest hits from this album, "Radio Ga Ga" and "Hammer to Fall", were among the songs performed as part of their 20-minute set.