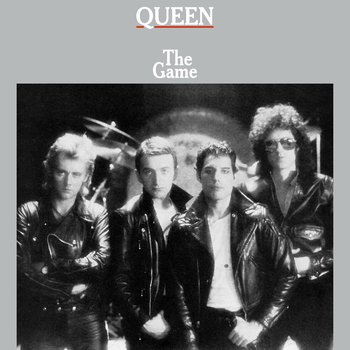 "This thing called love, I just can't handle it."
"This is your life, don't play hard to get.
It's a free world, all you have
To do is fall in love,
Play the game,
Everybody play the game of love."
—"Play the Game"
Advertisement:

The Game is the eighth studio album by British Glam Rock band Queen, and was released on 30 June 1980. The album was the band's first to be co-produced by Electric Light Orchestra collaborator Reinhold Mack, who would go on to co-produce the band's next three albums as well. It was also the first album in which the famously "no synths" band used synthesizers, specifically an Oberheim OB-X in this case. The album was a resounding commercial success, being the only one to have reached the #1 position in the United States. It also produced two #1 singles: "Another One Bites the Dust" and "Crazy Little Thing Called Love".

The Game was supported by five singles: "Crazy Little Thing Called Love", "Save Me", "Another One Bites the Dust", "Need Your Loving Tonight", and "Play the Game". The former single was the band's last release in the '70s, coming out in October of 1979, while the latter single's video marked the debut of Freddie Mercury's iconic mustache, which he would sport until 1987.

Hey, I'm gonna trope you too: