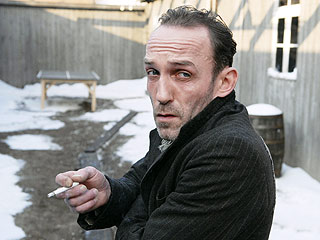 The Counterfeiters (German: Die Fälscher) is a 2007 German language film based on the true story of the Nazi Operation Bernhard, the largest counterfeiting operation in history. Jews and other concentration camp prisoners with artistic, printing, banking or counterfeiting experience are moved to Sachsenhausen Concentration Camp. They are forced to forge British pounds, in a Nazi plot to destabilise the British economy but the pounds are forged so well that the Germans decide to pay for the German war effort. Then the prisoners are told to print the American Dollar.

Burger, the communist collotype printer, resists the printing and together the prisoners manage to delay the printing until the war ends.

The subplot follows the main character, Sally Sorowitsch, a career forger and Jew as he befriends Berger and the young Russian artist, Kolya. Originally motivated by money and self-preservation, Sally begins to find honour in his existence.