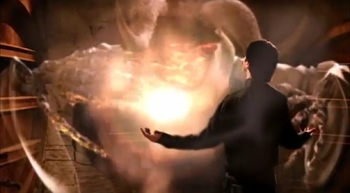 "I told you, I don't leave crossbows around all willy-nilly. Not since that time with Miss Kitty Fantastico."
—Dawn Summers
Advertisement:

Buffy effortlessly pulls the Scythe from the stone, leaving Caleb amazed. He is willing to fight her, though probably outmatched now that she has the Scythe. But The First (as Buffy) tells him to let Buffy go, and tells her that she will have to hurry to save her friends in the sewer.

Back at the Summers' residence, Andrew has just acquired food, while Dawn, Willow, Xander, and Anya return, having been looking for Buffy only to come across an empty house. Giles informs them that Faith and the others have not returned.

The Potential Slayers who survived the bomb blast — Kennedy, Amanda, Vi, Rona, and Caridad among others — start dragging the unconscious Faith and their other wounded towards the surface when they are ambushed by three Turok-Hans. Kennedy assumes command. All hope seems lost, though, until Buffy shows up with her new weapon and rescues them, killing all three Turok-Hans. Back at her house, the Potentials and Scoobies declare Buffy the leader again.

Willow and Giles look for references to the Scythe on the Internet. During their research, Willow confesses to Giles that she is not sure if she can do real heavy magic, even if she must. They find symbols that suggest a connection to scythes and Ancient Egypt.

At Buffy's insistence, a reluctant Xander renders Dawn unconscious with chloroform and drives off with her, away from Sunnydale for safety. When Dawn wakes up, she gives him a shock with a taser and then drives them back.

At the vineyard, Caleb meets with the First as he spouts his frustration over having to let Buffy leave with the Scythe. The First tells Caleb that his strength is waning and, in order to increase it again, merges with the preacher and lends him its power. Caleb is left with black eyes and declares that he is ready to take Buffy on again.

Buffy and Faith make up. Faith admits to Buffy that she was jealous of her friends, and lets it slip that she and Principal Wood have had sex. They both reflect upon how lonely they are as Slayers, and that they are the only ones in the group who truly understand what it feels like to be a Slayer. Buffy then has a personal discussion with Spike, in which they admit how much they feel for each other.

Andrew and Anya head to the hospital to retrieve supplies for the wounded, and have a heart-to-heart about humanity's desire to fight for good. They also have a wheelchair fight.

Following the Egyptian lead, Buffy takes the Scythe to a small pyramid that she discovers right outside one of the gates of the same cemetery that she has patrolled for the past six years. Inside, a woman claims to be the last of the Guardians, a secret female order that has watched the Watchers since ancient times tells. She tells Buffy that the Scythe is a powerful weapon forged for the final battle. Suddenly, Caleb shows up from behind the woman, kills her, and almost has Buffy bested when Angel steps in to save her. However, Buffy insists on fighting Caleb alone and slices his abdomen with the scythe. Caleb laughs for a moment, then changes expression and falls, seemingly dead.

Buffy gives Angel a kiss. Unbeknownst to them, Spike is hiding in the shadows with the First by his side. In Buffy's form, it tells him: "That bitch."