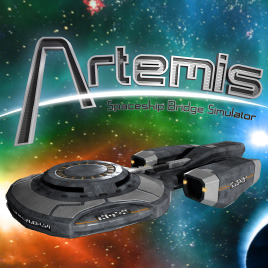 Fans of space operas and dramas such as Star Trek, Battlestar Galactica, and the like have wanted to actually step onto The Bridge of one of those starships since about 5 minutes after the first episode started. Now, with Artemis, we can.

Artemis is a LAN-based computer game in which players take on the roles of the bridge crew members of a Terran Space Navy starship. Each player sets up his computer to represent one of five bridge consoles on the ship, while the sixth plays the Captain and directs the action. The ship patrols an area of space, exploring for anomalies and protecting allied ships and starbases from attacks by four hostile alien races: the Kraliens, Arvonians, Torgoth, and Skaraan.

The positions into which a player can step are: