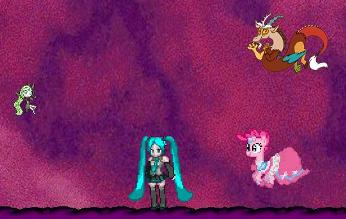 This game in a nutshell.
"Sing, colorless Meloetta! Melody of Discord!"
— Discord
Advertisement:

Meloetta: Melody of Discord is a freeware crossover game created by DialgaBrite, also known as Groudon128. This game involves Pokémon, My Little Pony: Friendship Is Magic and Vocaloid, not to mention Mega Man, dolls, whale poachers, and much more. The gameplay differs greatly depending on the character you are currently controlling - Meloetta flies, Pinkie and Miku platform.

The story centers on an imprisoned Discord's influence tempting Meloetta into singing a chaotic song, which frees him. The spirit of chaos immediately goes on a chaotic spree, enraging wild Pokémon, resurrecting evil whalers, discording Miku Hatsune and more. On her quest to stop him, Meloetta will team up with her friends Miku Hatsune and Pinkie Pie, and eventually defeat him with the very thing that freed him - music! Yes, apparently they all live in the same universe. Don't ask.

Meloetta: Melody of Discord may be downloaded here