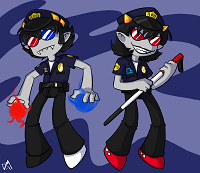 An Alternate Universe branching off of Andrew Hussie's Homestuck, originally based on art by Deeum

(an example of which shown on this page to the right). As the title suggests, it uses Hussie's characters and mythos to create a police vs. criminals setting. Hilarity Ensues.

There is little consistency in canon, with the same troll having portrayed as a beggar, a biologist, and a petty criminal in separate works. Usually, the stories take place in Alternia City, a metropolis with sizable Troll, Human, Consort, and Carapace populations. Usually, the Homestuck canon's Woobie is a criminal mastermind with a copy of the Evil Overlord List, Vriska is a Dirty Cop, and Rose is in charge of her very own SCP Foundation pastiche. There are, however, two very different and distinct "mainstream" canons: the RP canon on DeviantArt and the general fanfic canon on the forums.

This AU also generates a slew of Fan Art, much of which is indexed on the thread's first page.

, with a newer thread here

, where it has inspired a currently running radio show that is planned to last for several years, using stories collected from both the old and new threads. The deviantART RP is here

. A Tumblr for the deviantArt RP is available here