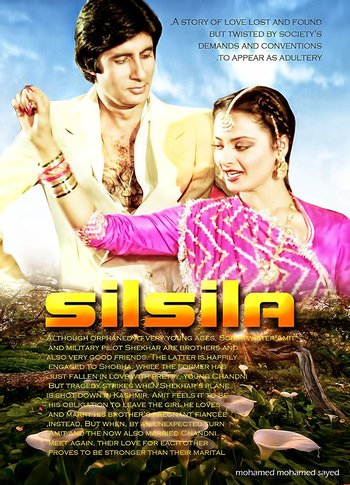 Silsila is an acclaimed but financially unsuccessful Bollywood film about adultery, an issue that Bollywood films seldom deal with in any depth. The story starts with Jaya Bhaduri and Shashi Kapoor as a young engaged couple who are totally blissfully happy, although she's an old-fashioned kind of a girl and a little alarmed by his love of booze and risky profession as a military fighter pilot. Meanwhile, Shashi's beloved brother Amitabh Bachchan has a Meet Cute with Rekha, and they are totally blissfully happy, so what could possibly go wrong?

Shashi dies in a plane crash, and when Amitabh finds out that Jaya is pregnant, he feels that he owes it to his brother's memory to marry her, which would give his unborn nephew a father figure and save Jaya from the stigma of unwed motherhood. When she loses the child in a miscarriage, Amitabh discovers that his old girlfriend is now married to his wife's doctor (Sanjeev Kumar). The two slowly renew their affair, to the increasing awareness and discomfort of their spouses, and eventually decide to elope together, but fate has a couple more twists to throw at them....