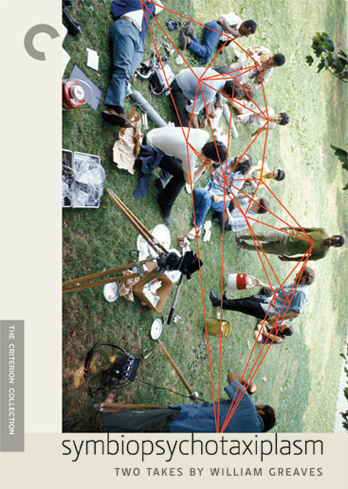 Symbiopsychotaxiplasm: Take One is an experimental film made in 1968, written, directed by, and starring William Greaves.

The film concerns a film crew shooting a fictional movie called Over the Cliff in New York City's Central Park. Multiple actors are shown testing for the roles of "Freddy" and "Alice" before Greaves seems to settle on his two leads. A film crew shoots actors Don Fellows and Patricia Ree Gilbert in the roles of Freddy and Alice, running through a scene in which Alice calls Freddy a homosexual and says she wants out of their dysfunctional relationship.

There's a second film crew on site, shooting a documentary of the first crew as it goes about conducting its screen tests for Over the Cliff. Then there's a third film crew on site, shooting the second crew as it shoots the first crew, as well as filming anything else of interest happening in the park. And beyond even that, there are additional scenes in which the crew of Over the Cliff meets by themselves in the absence of Greaves and commiserates on their frustrations with his idiosyncracies as a director.

Greaves was a documentarian who conceived of this film as a way to explore the nature of reality and the effect of the observer on what he observes. He spent three years editing this project, which was originally conceived as the first part of a five-part series (hence the "Take One"), before submitting it for screening at the Cannes Film Festival in 1971. It was rejected by the programmers at Cannes, and afterward sat on the shelf for years. Actor Steve Buscemi caught a screening in 1993 and took an interest in the film, which finally led to a theatrical and home video release in 2001.

Susan Anspach, who became a star two years later with her role in Five Easy Pieces, appears as one of the actresses testing for Alice. None other than the great Miles Davis composed and performed the score.