Film / The Devil Within Her 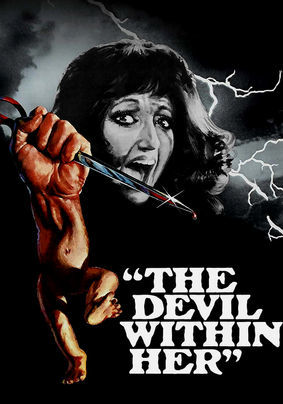 The Devil Within Her (also known as Sharon's Baby, I Don't Want to Be Born, The Child, It Lives Within Her) is a 1975 horror film starring Joan Collins, Donald Pleasence, and Caroline Munro.

Joan Collins plays a former dancer named Lucy who worked at a seedy nightclub where she was in an act with a frolicking male dwarf named Hercules (George Claydon). Lucy used to flirt with Hercules — harmlessly, she thought, but he took her seriously and made a pass at her one night, which she sternly rejected. Humiliated and angry, Hercules then leaps out in front of her and declaring, “You will have a baby, a monster, an evil monster conceived in your womb, as big as I am small, and possessed by the devil himself!”

Lucy thought nothing of it at the time, but after months pass and Lucy leaves the dancer business behind, she gets married and does give birth to a child. As soon as he is born, the little tyke is raking his fingernails down Lucy's face, and before long he's wrecking his playroom, ripping the heads off his dolls, spitting at people, and dropping dead mice into teacups. Things get worse as people around the baby are murdered.

Lucy's sister-in-law, a Catholic Nun suspects that the baby is possessed by a demon. Turns out, she's right.

The Devil Within Her provides examples of: