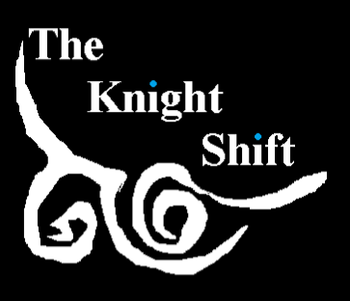 The Knight Shift is a Horror series from The Arkn Mythos. It was created and produced by DeathlyLogic, and is regarded as one of the most important works in The Arknverse, with the plot and characters tying into many of the works that were to follow.

The series opens with three young men driving to a party at night. After getting into an accident (due to hitting an animal in the road), they decide to seek help in a nearby house. The group is surprised to find the place unlocked; as they enter, one member of the group, a young man called "The Knight" (who is clad in a hoodie resembling a knight's armor) grabs a silver-headed cane to keep himself stable (as he injured his leg in the crash). As the friends explore their surroundings, it becomes apparent that that the house is deserted; things go from bad to worse as the cane begins to cause Knight to experience some bizarre, and frightening, side effects. After a seemingly deadly confrontation between the trio, Knight wakes up alone in the house — and the real terror begins.

In the spring of 2016, it was announced that there would be a follow-up series called The Knight Shift: End Times (a sequel designed to wrap up not just the story of Knight, but the Arknthology as a whole). A teaser trailer was posted on March 4, 2017; the first episode,"[11] The Fib", debuted on the same channel on March 8. Unfortunately, the series was cancelled after one episode (though the franchise was still able to receive closure through other series and various written works).

In April 2019, the original channel for The Knight Shift was deleted due to copyright strikes. Summaries of (and links to) the surviving episodes can be found here

Aye, there be spoilers below: