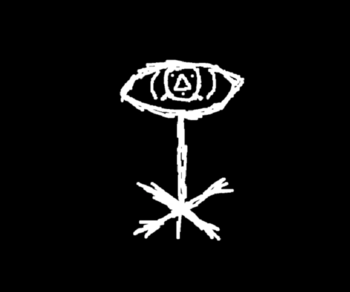 The symbol of the Arkn.
You hear a rustling from behind the attic door. Heavy breathing that is not your own can be heard, almost giving away the smile of whatever lurks behind the door. You shiver, fear kicks in. You run back to your room and lock the door before getting into bed and covering yourself with the covers. Sleep eventually takes you as you forget about the monster in the attic, but as you forget, he remembers. Your guardian angel, your Arkn, takes control of the situation while you rest. Waking up in the morning to find your door open, and the attic door wide open may be discerning at first, but going to sleep soundly with no more interruptions from the monster that lie slain beyond your sight is more rewarding than anything.
— Original introduction to the Arkn Mythos wiki

The Arknverse (or Universe A, as it as sometimes known) is the first incarnation of the web-based franchise known as The Arkn Mythos. Created by DeathlyLogic, Kekstein and TypeONegative (not to be confused with the band of the same name), it began in 2014 as a series of independent projects, including a Skype-based Haunted House RPG, a (now defunct) Slenderverse vlog called RedlightOmega

, and a Cyberpunk ARG called Liquid Bones. The three creators incorporated various ideas and elements from the projects into a cohesive mythology, creating the basis for what became the Arknverse. Since then, the community has grown and expanded to include dozens of works, with complex, interconnected storylines spawned by countless creators.

The conflict between the angelic-looking, magick-wielding Arkn and the demon-like, psychic Dekn has been raging since time immortal. The war is further complicated by the birth of a new race of beings: humans, who are patterned after the Arkn (minus their magic powers and wings). The Arkn begin interfering in the lives of humans, the Dekn attempt to thwart them, and it isn't long before humanity is caught in the crossfire and nearly destroyed. Fortunately, thanks to the work of a powerful Dekn guild called the Persophelums, the human race is preserved and continues to thrive — inside a sentient A.I. system known as ".Reality". The system holds countless copies of the original Earth and its inhabitants, and is intended to provide all humans with infinite opportunities to live out their days free from the meddling of the Arkn. However, the Arkn have discovered ways to infiltrate the system — and the War continues to affect and involve humans in ways that neither side could have anticipated.

The Myth Arc at the heart of the Arknverse draws inspiration from modern pop culture (including Supernatural, The Matrix, and The Dark Tower franchise) and mythological literature (particularly Classical Mythology, The Epic of Gilgamesh, and Abrahamic theology). The stories are told through vlogs and blogs, as well as electronic music. As of 2020, all Arkverse content has been declared non-canon to The Arkn Mythos, as per the continuity reboot.

The individual works in the Arknthology and the Arkn Mythos Chronology are outlined on the (work in progress) Recap page. There is also a masterpost

listing all the content from the Arknverse. While most of the content has unfortunately been removed, descriptions and GIFs from the franchise can be found on the official wiki

The Arknverse provides examples of: