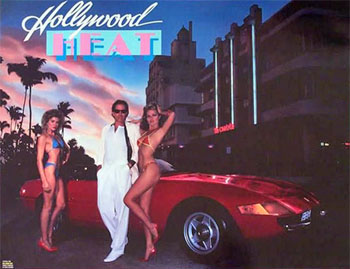 The Heat Is On!
"A Vice Worth Having!"
— Promotional flyer
Advertisement:

Hollywood Heat is a Physical Pinball Table designed by John Trudeau with art by Larry Day. It was released by Premier in 1986.

The game itself is a blatant attempt to invoke Miami Vice; the backbox translite features a white-suited Crockett wannabe posing next to a genuine Ferrari Daytona with two bikini-clad women, underneath the "Hollywood Heat" logo done in the Vice typeface. The table itself is more interesting, with a translucent red spiral and a miniature playfield nestled among neon flamingos, palm trees, and pastel-colored eighties pop art. A set of chutes sends the ball in various unorthodox directions, while the "Hot Shots" jump ramp allows players to quickly return to the upper mini-playfield.

As with other Premier pinballs of the period, the rules are not overly complex, making it suited for intermediate players looking for a fun, straightforward game. It's considered an overlooked jewel by those who managed to get past the silly theme, and is regarded as one of Premier's better games. Steve Ritchie has called it one of his favorite games of all time.