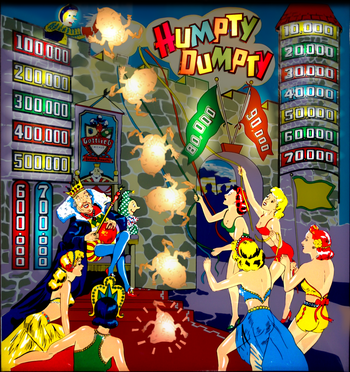 Humpty Dumpty didn't fall down, he was pushed!
The Greatest Innovation In the History of Pin Games!
—Advertisement
Advertisement:

If there is one historical Pinball game non-enthusiasts have heard about, the odds are good that it's Humpty Dumpty, an electro-mechanical table released by Gottlieb in October 1947 that is often credited for inventing the flipper.

As with other pinball games of the era, the objective is simple enough: shoot balls onto the table to hit the various bumpers to score points. However, Humpty Dumpty had six red "flipper bumpers," two inches long, located around the perimeter of the playfield; by pressing two "super sensitive control buttons", players could make the flippers kick the ball back up the field. As the player advanced, lights on the backglass show Humpty Dumpty falling off of a castle wall, to the amusement of the King and his royal court.

Contrary to popular misunderstanding, flippers were already used on many arcade games before Humpty Dumpty, but they were strictly mechanical bats for baseball games. Humpty Dumpty's electro-mechanical flippers were original in their strength and ease of use. Harry Mabs is credited with inventing the electro-mechanical flippers; however, Jerry Koci had earlier filed a patent for a similar device, for an unreleased game at Chicago Coin.

It is not an understatement to say that Humpty Dumpty revolutionized arcade gaming; it took the market by storm and instantly made flipperless games obsolete. Less than a month after it was released, a distributor placed an ad

thanking Gottlieb for "making the greatest improvement in the history of pin games". Competitors quickly responded, first by releasing flipper conversion kits for existing games, and then offering their own flipper-featured games. By April 1948 — just six months later — flippers were standard on every pinball game available.

A digital version is available for the original PC version of Microsoft Pinball Arcade.