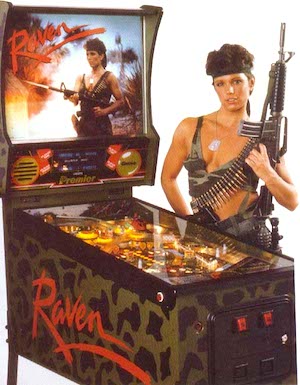 Raven is a Physical Pinball Table designed by John Trudeau, with artwork by Don Marshall and Larry Day. It was released by Gottlieb under the "Premier" label in 1986.

The titular Raven is a female soldier of fortune, a One-Woman Army fighting in an unnamed southeast Asian jungle. Charge the camp and shoot the six lower targets, then gun down the Snipers when they pop out of hiding. Advance to the officers' quarters and hit the upper target bank to lower the ramp, then go up the ramp and destroy the two watchtowers. Complete the upper rollovers for the multiplier, but look out for the helicopter hovering nearby.

Raven was touted by Premier as being the first pinball machine to use a photograph for the translite art. This turned out to be rather ironic, as the game has become infamous for its Narmy backbox photo; the Faux Action Girl with her '80s Hair is universally mocked for her unconvincing portrayal of a jungle fighter. Pinball buffs who look past the art find it to be a simple but fun game, a good table for beginners with some respectable challenges mixed in. Raven might never be considered a pinball classic, but there's a certain amount of Narm Charm at its heart.